A Slam Dunk for Dunkin' Donuts? 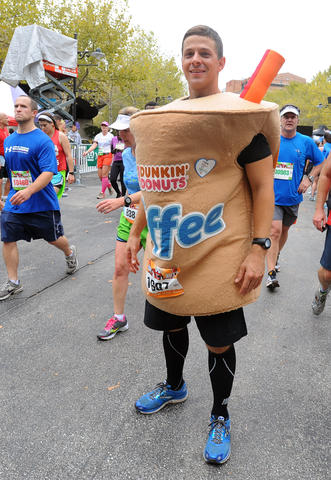 How does a doughnut company get customers to wear their custom clothing? Give them the option. Embroiled in a coffee battle with other major company chains like Starbucks for their share of the $20 billion coffee industry market, Dunkin' Donuts has not just asked employees to wear company uniforms, they have put out an open invitation for consumers to join in too. Brilliant? It just might be. The company sells Dunkin' Donuts apparel baring the company logo and signature colors with endorsing messages about the company to consumers on their website. As a result, many consumers are buying more than coffee from Dunkin', they are buying Dunkin' t-shirts too.

Technology and social media have made it easy for consumers to tell others that they "Like" a product or company. A simple click on an icon can allow consumers to tell thousands of other potential consumers that a company or product passes the tests of quality and satisfaction. As a result, other potential consumers are drawn to the business. Dunkin' Donuts has taken chance with the belief that custom t-shirts can have the same affect as a Facebook "Like". With the t-shirt industry sales topping $20 billion annually, Dunkin' Donut has tapped into consumers affinity for t-shirts as a way to allow consumers to express their love for their donuts and their coffee.

The Massachusetts based Dunkin' Donuts was started in 1950 as a fried dough confectionery seller. Now the company has a bigger battle - the coffee wars. In 2007 shifted its push for a bigger share of the coffee market with its t-shirts featuring the slogan "Friends Don't Let Friends Drink Starbucks" and later with the slogan "HOT" positioned between the logo and a cup of coffee. In 2013 customers competed for the chance to design the new company t-shirt as a part of National Coffee Day. Hundreds of designs were submitted and over a hundred thousand votes were cast. The winning entry featured the word coffee outlined with coffee grinds spelling out the word "coffee" with the Dunkin' Donut logo at the right of the design. As a result, costumers wear and share a message that Dunkin' Donuts has a product that they are proud to let others know about and encourage others to join them.

T-shirts with a Greater Purpose in Mind

Dunkin' Donuts is not just about profits. Their t-shirts send the message that Dunkin' is there when a natural disaster strikes. In 2012 Dunkin' Donuts store owners in New Jersey designed their own company shirts to raise money for to rebuild the city after Hurricane Sandy. The t-shirts bore the message "REBUILDD Long Island". The double "D" in rebuild stands for Dunkin' Donuts. All proceeds from sales of the t-shirt went to the Long Island Cares, Inc., an emergency response and recovery services organization. The t-shirts sold for $11.99.

Contact us for more information about custom clothing for your company.